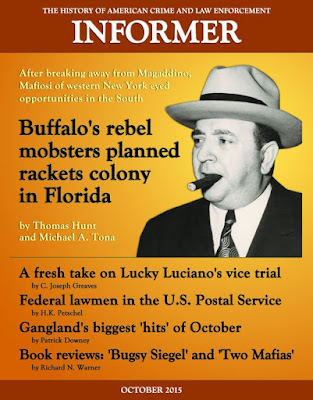 Smothered by law enforcement surveillance and infiltration in their home territory and wary of reprisals by deposed boss Stefano Magaddino, a rebel group of Buffalo, New York, Mafiosi in 1969 explored racket opportunities in what they thought were greener pastures in Florida.
The move quickly caught the attention of the FBI. Rather than provide security for the breakaway organized crime faction, the lost time and resources in Florida led to the collapse of the Pieri-DiCarlo regime in the Buffalo underworld. In this issue, Thomas Hunt and Michael A. Tona tell the story of Buffalo’s attempts to establish a rackets colony in Florida (Preview).

Plenty has been written over the years about Lucky Luciano. Some accounts have been factual, some fictional, at least one fictional pretending to be factual. In C. Joseph Greaves’ latest novel, we find a fictional account built on a foundation of historical research. Greaves tells readers about his book, his approach and the cache of previously overlooked documents that provided him a fresh window into the subject (Preview).

What is the oldest U.S. federal law enforcement agency? The little known postal inspection service, formed under Benjamin Franklin in the Colonial Era, has a claim to that designation. Author and retired postal inspector H.K. Petschel provides a brief history of “the Silent Service” (Preview).

Fifty-four pages, including covers and eight pages of advertisements.

Tweet
Posted by Thomas Hunt at 7:46 AM No comments:

By Thomas Hunt and Michael A. Tona

"After breaking away from the Magaddino Crime Family in 1969, mobsters from Buffalo, New York, explored racketeering options in Volusia County, Florida, and entered into negotiations with the Tampa-based Santo Trafficante organization and other Mafia groups before law enforcement pressure triggered their retreat. The failed effort to establish an organized crime colony in Florida left the once powerful Buffalo Mafia struggling for revenue and relevance in the post-Valachi Era. A decade and a half of decline followed. By 1984, the organization effectively ceased to exist..."

Twelve pages with twenty-two photographs and one map.

Tweet
Posted by Thomas Hunt at 7:39 AM No comments:


A glimpse behind the curtain
of ‘People v. Luciano’

"Talk about an offer I couldn't refuse. The year was 1999, and the setting was a sun-drenched patio in Southern California. Elise 'CeCe' Levy, the daughter of a prominent New York criminal defense attorney named George Morton Levy, casually mentioned that, following her father’s death in 1977, all of his office files had been moved into storage in upstate New York. Knowing as I did that CeCe’s father had defended Charles 'Lucky' Luciano in the colorful and controversial vice trial that had effectively ended Lucky’s criminal reign and catapulted special prosecutor Thomas Dewey into the New York governor’s mansion, I asked if I might have a peek at those files..."

Tweet
Posted by Thomas Hunt at 7:33 AM No comments:

"Since the earliest days of the American republic, the argument has raged over whether the Postal Inspection Service or the United States Marshals Service deserves to be regarded as the oldest federal law enforcement agency. (The U.S. Customs Service, securing borders and enforcing import duties beginning in July 1789, also has a claim to this designation. In March 2003, that service was merged into U.S. Customs and Border Protection.)..."

Posted by Thomas Hunt at 7:30 AM No comments:

"...Gragg starts out by dismantling the Hollywoodization of Siegel through movies such as the 1991 film Bugsy, starring Warren Beatty and Annette Bening. (Bening, Beatty’s soon-to-be real-life wife, played Siegel’s volatile paramour, Virginia Hill.) While most viewers found the film entertaining, organized crime buffs, historians and researchers found it frustrating and vexing with its erroneous depictions of Siegel as a 'kill-crazy' psychopath and the founder of the Las Vegas casino industry, among many other historical falsifications..."

Posted by Thomas Hunt at 7:25 AM No comments:

"October is my favorite month for many reasons. The weather is generally very comfortable, the autumn colors are a feast for the eyes, there’s cider and donuts and my favorite holiday, Halloween. October also happens to be a very interesting month in terms of 'Dead Guys in Suits.' A number of big gangland hits took place in the tenth month of our calendar..."

Posted by Thomas Hunt at 7:22 AM No comments: 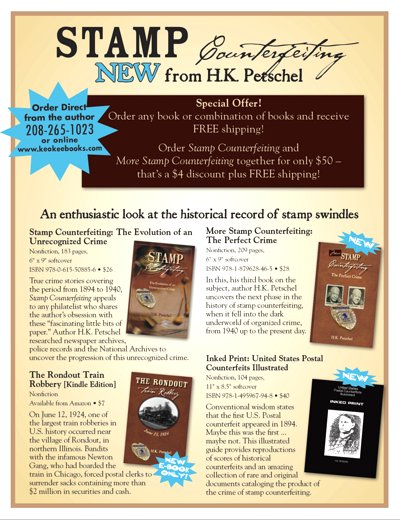 Stamp Counterfeiting
New from H.K. Petschel
True crime stories covering the period from 1894 to 1940. Stamp Counterfeiting appeals to any philatelist who shares the author's obsession with these 'fascinating little bits of paper.' Author H.K. Petschel researched newspaper archives, police records and the National Archives to uncover the progression of this unrecognized crime.

Tweet
Posted by Thomas Hunt at 11:03 AM No comments: 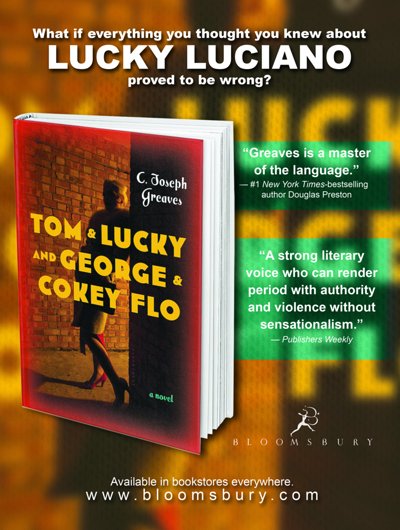 Tom & Lucky and George & Cokey Flo
(a novel)
by C. Joseph Greaves
Charles 'Lucky' Luciano is the most powerful gangster in America, Mob overlord and bootlegger millionaire. Thomas E. Dewey is an ambitious young prosecutor determined to bring him down, and Cokey Flo Brown – grifter, heroin addict and sometime prostitute – is the witness who claims she can do it. Only a wily defense attorney named George Morton Levy stands between Lucky and a life behind bars, and between Dewey and the New York Governor's mansion.

Tweet
Posted by Thomas Hunt at 10:57 AM No comments: