[Ten years ago: Reprinted from July 2009 issue of Informer.] 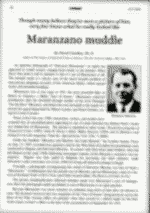 An apparent photograph of “Salvatore Maranzano” has appeared in varied venues, ranging from books to the Internet. What those who print it fail to mention is that it’s not of Maranzano at all. The mistake made is a classic case of the much broader problem of inaccuracies plaguing accounts of the American Mafia, which spread myths and misunderstandings.