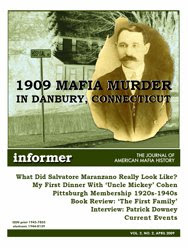 July 2009 marks the 100th anniversary of a still unsolved murder in the City of Danbury, Connecticut. While the killers of Giovanni Zarcone remain unknown, history has linked them to the New York Mafia organization of Giuseppe Morello. In this issue, we examine the known details of the Zarcone murder and follow the links between the victim and other organized criminals of the era.

What did Mafia boss of bosses Salvatore Maranzano look like? If you believe you know, author David Critchley says you’re mistaken. According to Critchley, a photograph often presented as a likeness of Maranzano is actually someone else’s mug shot. Read more about it and take a look at some actual images of Maranzano—plus Informer’s own approximation of a Maranzano mug shot.

Also in this issue: Researcher Bill Feather provides us with background data on scores of Pittsburgh-area Mafiosi and Informer tackles a question about the “Teflon Don,” John J. Gotti, late boss of the Gambino Crime Family.

Books coverage includes an excerpt from King of the Sunset Strip: Hangin’ with Mickey Cohen and the Hollywood Mob by Steve Stevens and Craig Lockwood; an interview with Patrick Downey, author of Gangster City and Bad Seeds in the Big Apple; in addition to reviews of Mike Dash’s The First Family and Sandra Harmon’s Mafia Son.

1909 Mafia murder in Danbury, Connecticut, by Thomas Hunt. After a fruit farmer is shotgunned to death at his home, authorities connect him to the infamous Barrel Murder six years earlier. Eighteen pages. (Preview)

Maranzano Muddle by David Critchley, Ph.D. You may think you know what Salvatore Maranzano looked like, but a widely disseminated photo isn't Maranzano at all. Two pages. (Preview)

My First Dinner with Mickey by Steve Stevens and Craig Lockwood. A young Hollywood actor finds himself palling around with California racketeer Mickey Cohen. Four and a half pages.(Preview)

Interview: Patrick Downey. Two and a half pages.

Book Review of The First Family by Mike Dash. One and a half pages.

Book Review of Mafia Son by Sandra Harmon. One and a half pages.

Books: New Releases: One half page.

Ask the Informer: The Teflon Don's conviction. One page. (Preview)

48 pages including cover and advertisements
Published July 15, 2009.
Posted by Thomas Hunt at 8:56 AM No comments: 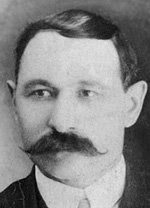 "A halo of artificial light surrounded Danbury Hospital, a complex Victorian-style structure located at the intersection of Locust and Hospital Avenues near the official city limits. Light also emanated from the city's almshouse at Broadview farm, a third of a mile further east on Hospital Avenue. In between, the avenue was illuminated only by the quarter moon overhead. Moonlight was sufficient to provide visibility on the roadway itself, but it could not penetrate the tree branches and shrubs growing along the north side of the street."
Fourteen and a half pages article body
including sidebar story.
Three and a half pages of endnotes.
Twelve images.
Click here to preview or purchase this issue.
Or subscribe to Informer using the links at right.
Posted by Thomas Hunt at 8:47 AM No comments:

Though many believe they've seen a picture of him,
very few know what he really looked like 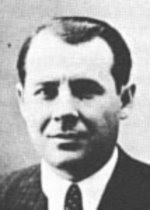 "An apparent photograph of 'Salvatore Maranzano' (at right) has appeared in varied venues, ranging from books to the Internet. What those who print it fail to mention is that it's not of Maranzano at all. The mistake made is a classic case of the much broader problem of inaccuracies plaguing accounts of the American Mafia, which spread myths and misunderstandings."

Click here to preview or purchase this issue.
Or subscribe to Informer using the links at right.
Posted by Thomas Hunt at 8:35 AM No comments:

In the News:
Click here to preview or purchase this issue.
Or subscribe to Informer using the links at right.
Posted by Thomas Hunt at 8:30 AM No comments:

Ask the Informer: The Teflon Don

Question: When and on what charge was John "Teflon Don" Gotti finally locked away for good?

Click here to preview or purchase this issue.
Or subscribe to Informer using the links at right.
Posted by Thomas Hunt at 8:27 AM No comments:

Email ThisBlogThis!Share to TwitterShare to FacebookShare to Pinterest
Labels: ask the informer, gotti, vol 2 no 3

100 years ago:
A New York Barrel Murder suspect is shot to death in Connecticut.

75 years ago:
A future New York crime boss is arrested for robbing a store.

50 years ago:
A Brooklyn racketeer and his female companion are killed.

Click here to preview or purchase this issue.
Or subscribe to Informer using the links at right.
Posted by Thomas Hunt at 8:21 AM No comments:

Email ThisBlogThis!Share to TwitterShare to FacebookShare to Pinterest
Labels: a look back, barrel murder, brooklyn, connecticut, robbery, vol 2 no 3

'My first dinner with Mickey'

My first dinner with Mickey
by Steve Stevens
and Craig Lockwood 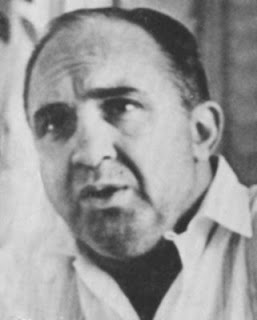 (Show business veteran Steve Stevens reflects on his early encounters with California underworld figure Mickey Cohen in this excerpt from King of the Sunset Strip by Steve Stevens and Craig Lockwood.)

"I pushed the doorbell. And the door opened. As if someone had been waiting, just inside. Before I could stop myself, I lurched back.
"'Yeah?' The voice and the guy were both scary. His heavy black eyebrows looked like they'd been applied by the Lon Chaney School of makeup design."


Four and a half pages
Five photos


Click here to preview or purchase this issue
Or subscribe to Informer using the links at right.
Posted by Thomas Hunt at 8:12 AM No comments:

Vol. 2, Issue 3, July 2009 Contents
Membership Chart
Researcher Bill Feather provides a chart of dozens of known and suspected Pittsburgh Mafia members from 1900 through 2000. Names, aliases, birth-death-immigration data, birthplaces and ranks are provided.
4 pages
Click here to preview or purchase this issue.
Or subscribe to Informer using the links at right.
Posted by Thomas Hunt at 8:02 AM No comments: