The 1909 Mafia murder in Danbury, Connecticut, was the discussion topic at the Danbury Museum and Historical Society on Oct. 8, 2009. Informer Editor Thomas Hunt spoke to a small audience of 15 people about the slaying of farmer Giovanni Zarcone and that event's connections to the Morello Mafia organization of New York. He traced Zarcone back to his Sicilian roots in Bagheria and tracked his eventful life from his arrival in Manhattan in 1901, through the infamous Mafia Barrel Murder of 1903 to his ambush on a quiet country road on July 27, 1909. 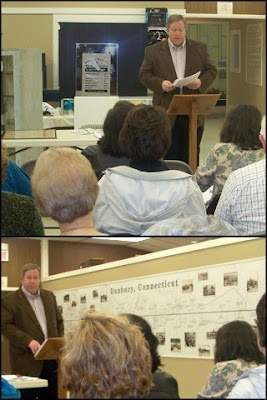 On the 100th anniversary of the Danbury murder, a Hunt article on the 1909 murder was published in Informer: The Journal of American Mafia History. The Oct. 8 discussion was arranged by Brigid Guertin and Diane Hassan of the Danbury Museum and Historical Society.
The text of the Oct. 8 remarks can be downloaded through the Scribd.com service:
http://www.scribd.com/doc/20841805/1909-Mafia-Murder-in-Danbury-text
(A free Scribd account is required for download.)
The July issue of Informer, featuring the history of the Zarcone murder, also can be downloaded from the Scribd.com service:
http://www.scribd.com/doc/20054920/Informer-v02n3-2009-July
Posted by Thomas Hunt at 4:23 AM No comments: