Informer adds to 'Maranzano muddle'
by reprinting a mislabeled portrait

A 1931 photograph said by Italian periodical Piccola to be a likeness of New York-based Mafia leader Salvatore Maranzano has turned out to be an image of a German mass murderer. 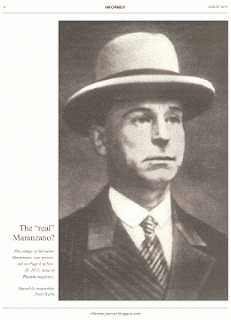 In our August 2019 issue on Maranzano, Informer printed the image (above) along with a short article describing the photo's recent discovery by a Canadian researcher and a caption reading: "The 'real' Maranzano?"

It was hoped that the discovery represented a victory in the eighty-eight-year quest for a photo of the living Maranzano. (There are a couple of crime scene photos taken following Maranzano's September 10, 1931, murder.) But, like another photo long believed to be the Mafia boss (but a decade ago proven in Informer to be a mug shot of an English vice criminal), it turned out to be someone else.

Due to the efforts of a keen-eyed European crime historian, the recently discovered photo was traced to portraits made of convicted multiple murderer Peter Kurten. Some known photos of Kurten - often referred to as "The Monster of Dusseldorf" or "The Dusseldorf Vampire" - match the supposed Maranzano photo published in the November 10, 1931, issue of Italy's Piccola. The photos match in facial details, hat and clothing. One also shows identical facial positioning and seems to be the original full-length image from which the Piccola portrait was cropped.

Kurten was convicted of multiple murders and attempted murders in spring 1931. He was executed by guillotine in Cologne, Germany, on July 2, 1931. Photos of Kurten were published around the world in spring and summer of 1931. So, an image of the killer was probably close at hand when Piccola sought to illustrate its article on Maranzano's assassination.

We were advised of the connection to Kurten on the evening of September 15, 2019, and immediately posted a notice on our website and our Twitter and Facebook accounts. Our investigation quickly revealed that the Piccola image was Kurten.

We apologize to our readers for inadvertently contributing to the generations-old "Maranzano muddle."

Image at left from Murderpedia
Posted by Thomas Hunt at 12:45 PM 2 comments:

We just received some disappointing news about the recently discovered Maranzano photo, which was revealed and discussed in our latest issue.

We are checking into the details now. And we should have an announcement tomorrow.
Posted by Thomas Hunt at 8:22 PM No comments: