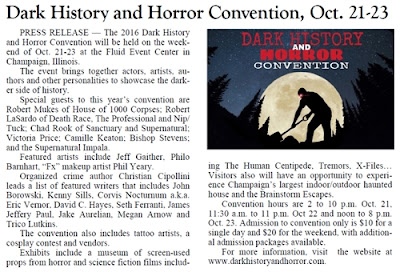 Tweet
Posted by Thomas Hunt at 5:59 PM No comments: 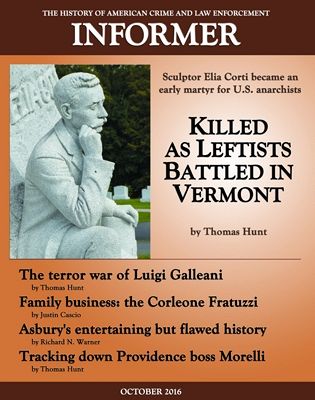 A highly regarded sculptor of granite was shot to death at a 1903 meeting of socialists in Vermont. Elia Corti joined a growing list of martyrs to the radical leftist cause of anarchism, championed by Vermont-based newspaper editor Luigi Galleani.

A short time after the death of Corti, followers of Galleani engaged in a war of terror against leading figures of capitalism and the government of the United States. The little-remembered fight involved government abuses of individual rights, wholesale deportations of foreigners deemed to be threats and a series of anarchist bombings that climaxed with a deadly explosion on Wall Street.

In this issue, Thomas Hunt looks at the Corti killing (Link) and the anarchists’ conflict with the U.S. (Link).


48 pages including covers and nine pages of advertisements.

Tweet
Posted by Thomas Hunt at 11:59 AM No comments:

"What was billed as a political discussion became a bloody melee. Several gunshots were fired and a man fell mortally wounded. At least one man was stabbed. Another was thrown down stone stairs into the street. By the time police arrived, the shooting victim was near death, and the cause of American anarchism was about to gain a new martyr."

Ten pages including one and a half pages of notes, nine images.

Preview / purchase electronic and print editions through MagCloud.
Tweet
Posted by Thomas Hunt at 11:38 AM No comments:

"Nearly all the leaders of the Corleone Mafia for the past hundred years have been related to one another through blood and marriage. The Sicilian Mafia we know today was once many Mafias. Each town, suburb and district of the Province of Palermo, the heartland of the Sicilian mafia, had a local gang and a different leader..."

Twelve and a half pages, one family tree

Preview / purchase electronic and print editions through MagCloud.
Tweet
Posted by Thomas Hunt at 11:34 AM No comments:

History must be more than
the repetition of legend
by Richard N. Warner 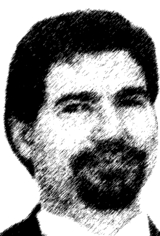 "Lately I've been revisiting The Gangs of New York. Not the film, although the Martin Scorsese-directed film was enjoyable. My favorite character was Daniel Day-Lewis's 'Bill the Butcher' Cutting, the stove-pipe hat wearing nativist bully, and my favorite scene was the preamble to the fight between Cutting's Natives against the Dead Rabbits. Liam Neeson as the priest Vallon stands holding a cross and one gang after another lines up on his side. 'The O'Connell Guard!' 'The Shirt Tails!' 'The Chichesters!' 'The Forty Thieves!' Entertaining, yes. Accurate history, not so much..."

One and a half pages.

Preview / purchase electronic and print editions through MagCloud.
Tweet
Posted by Thomas Hunt at 11:31 AM No comments:

The Galleanists' war of terror


The Galleanists' war of terror
by Thomas Hunt

"The roots of the anarchist political philosophy in Europe extend back to the French Revolution and may be detected in many of the countries of Europe. Living conditions of the working classes through the Industrial Revolution aided the spread of the anti-authority philosophy. Some of its early proponents in Italy were Carlo Cafiero, Errico Malatesta and Giuseppe Fanelli.
Though socialists-communists and anarchists sought similar revolutionary objectives, they differed substantially on approach and regularly came into conflict..."

Five and a half pages including one page of notes, two images.

Preview / purchase electronic and print editions through MagCloud.
Tweet
Posted by Thomas Hunt at 11:27 AM No comments:

Preview / purchase electronic and print editions through MagCloud.
Tweet
Posted by Thomas Hunt at 11:23 AM No comments:

"January 12—One Dallas patrolman is killed and another is seriously wounded in a gunfight with Italian gangsters. Police are searching for saloon-keeper Frank Bonano, believed to be one of the gangsters..."

One half page, one image

Preview / purchase electronic and print editions through MagCloud.
Tweet
Posted by Thomas Hunt at 11:21 AM No comments:

On the trail of 'Butsey' Morelli
by Thomas Hunt

"Those seeking information on long-time Providence, Rhode Island, rackets boss Frank 'Butsey' Morelli have likely encountered the few short mentions in former mobster Vincent Teresa's autobiography and very little else. Morelli was an important figure in the development of the New England Mafia, and he was an especially long-tenured chieftain over the Providence underworld, but he was not a cooperative historical figure."

Tweet
Posted by Thomas Hunt at 11:18 AM No comments: