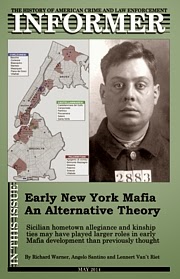 An Informer issue devoted to a groundbreaking discussion of the evolution of the early New York City Mafia is now available as an Amazon Kindle e-book. It is our hope that this will allow a wider audience for the "alternative theory" presented by Mafia historians Richard Warner, Angelo Santino and Lennert Van`t Riet.

Sicilian hometown allegiance and kinship ties may have played larger roles in early Mafia development than previously thought. Using government records, other archival sources and published accounts, the writers follow offshoots of established Sicilian underworld organizations from Palermo, Corleone and Castellammare del Golfo as these propagate in a new land. The writers define relationships among and within the developing crime families and explore factional frictions through two early Mafia wars.

The discussion is accompanied by photographs, maps, charts and timelines. More than two hundred endnotes are provided.

This Informer issue was first released in print and PDF electronic editions (through MagCloud) in May 2014, and those editions remain available. It is the third Informer issue to be made available as a Kindle e-book.

Posted by Thomas Hunt at 4:48 PM No comments: