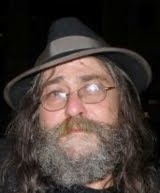 Rick “Mad Dog” Mattix, 57, of Bussey, Iowa, died Wednesday, Oct. 27, at the Iowa Methodist Medical Center in Des Moines. He was born on September 21, 1953, at Oskaloosa, Iowa, the son of Virgil and Aletha McKim Mattix. He graduated from Twin Cedars High School with the class of 1971. Following high school Rick went to work for a local factory. He retired from there in 1998, after an accident.
Rick’s passion in life was researching gangster history; he was a world renowned author, researcher and historian on the subject. He was known by the gangster community as the “Godfather” of gangster history. He had appeared on the History Channel and on an A&E Biography program, speaking on gangster history. He has written several books on the subject - including The Complete Public Enemy Almanac coauthored with his friend William Helmer - and his knowledge will be greatly missed. In July 2010, Rick announced that he and Thomas Hunt would partner in the operation of quarterly journal Informer: The History of American Crime and Law Enforcement.
On April 28, 2000, he was united in marriage to Linda Steele at Bussey. He took Linda all over the country doing research. He will be remembered as a one of a kind person that never had a harsh word for anyone. He was an avid dog lover. He was a strong supporter of Indian rights and the National Rifle Association. He enjoyed listening to the Beatles and enjoyed a laid-back life.
He is survived by his wife Linda Mattix of Bussey; two stepsons: Adam Steele of Bussey and Eli Steele of Des Moines; a very close grandson: Ridge Steele; a sister and her husband: Pamela and Terry Bonnett of Bussey; and two brothers: Duane and Barbara Mattix in Georgia, and Leland Mattix of Chicago, Illinois; his father in law: Kenny Hunt of Lacey; and many nieces and nephews.
Rick was preceded in death by his parents; three brothers: Delmar and Darrel Mattix and Frank Wignal; and three sisters: Beverly McDaniels, Delores DeVore, and Patty Wilson; and his mother in law: Darlene Hunt.
Funeral services for Rick Mattix, will be held Sunday, October 31, 2010, at 3 p.m. in the Bates Funeral Chapel in Oskaloosa with Pastor Alvern Boetsma officiating. As was Rick’s wish his body will be cremated following the funeral. The Bates Funeral Chapel is in charge of the arrangements. Visitation will begin Saturday after 12 noon in the Bates Funeral Chapel in Oskaloosa and then continue until 6 p.m. on Saturday. Visitation will begin again on Sunday morning after 10 a.m. and the family will be at the funeral chapel on Sunday afternoon from 1:30 - 3 to greet friends and relatives. Memorials may be made to the Rick Mattix Memorial Fund.
To send condolences to the Rick Mattix family, send e-mails to: director@batesfuneralchapel.com.
Posted by Thomas Hunt at 7:20 PM

Email ThisBlogThis!Share to TwitterShare to FacebookShare to Pinterest
Labels: mattix