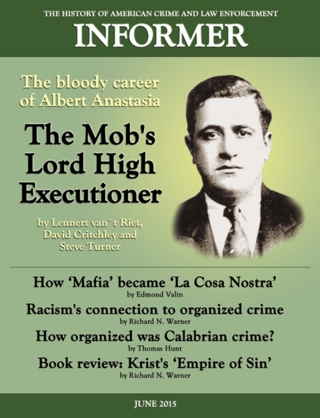 Often neglected in discussions of United States Mafia history, Calabrian-American organized criminals take center stage in this issue of Informer. Our feature article is a biography of Albert Anastasia, researched and written by Lennert van`t Riet, David Critchley and Steve Turner. The bloody early years of Calabria-born Anastasia’s underworld career and his supervision of the activities of the Murder Incorporated enforcement arm are the focuses of the piece. (Preview)

In a much lengthier-than-usual column at the back of the issue, Thomas Hunt considers the possibility that the Calabresi themselves formed an extensive criminal network in the U.S. and Canada before they were absorbed into the American Mafia’s Sicilian dominated crime families in the early years of the Prohibition Era. (Preview)

We expect that our regular readers already have noticed our change in format — a return to the full magazine size we formerly used from September 2008 through June 2012. While there were benefits to the more compact “digest” size we used from October 2012 through November 2014, the move back to a full magazine format was made due to the same irresistible force that lies behind all changes in the publishing world: the publisher likes it better.

Seventy-six pages, including covers and six pages of advertisements.