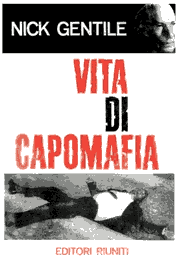 "Two editions of Vita di Capomafia by Nick Gentile were published in Italy, but additional versions of the Gentile recollections were written. While each provided much of the same core material, there were some noteworthy differences. In this article, we will look at the versions of Gentile’s memoirs, their structural differences and their common themes. Portions of Gentile’s life story first reached the public through a series of articles written by left wing Italian journalist Felice Chilanti and published simultaneously in the Paese Sera newspaper in Rome and the L’Ora newspaper in Palermo, Sicily, in the autumn of 1963. Eight articles under the headline, 'Un mese dentro la mafia' (A month inside the Mafia) were published, every two to three days, between September 14 and October 1..."